The message of SYRIZA MEPs’ event at the European Parliament, on the occasion of projecting director and journalist Angelique Kourounis’s documentary "Golden Dawn: A Personal Affair"

The rise of far right and fascism in Greece and Europe was at the heart of the debate which took place on the 27th September in the European Parliament, in the shadow of the unfortunate conjuncture of the far right AFD’s entering the German Parliament for the first time since World War II. SYRIZA's Delegation organized an event in which Angelique Kourounis’s documentary "Golden Dawn: A Personal Affair" was screened.

The debate ahead of the screening started by the Vice-President of the European Parliament and head of SYRIZA’s Delegation, Dimitris Papadimoulis, calling for a "strong, anti-fascist unity", expressing the certainty that within 2018 justice "will make decisions" against the neo-Nazi Golden Dawn. "The battle against the far right is the best we can do in the memory of P. Fyssas", said Dim. Papadimoulis, referring to the recent German elections and the entry of the Germany’s far right in parliament for the first time since 1945, and stressing that "it is necessary to isolate fully Golden Dawn from any parliamentary representation’’.

SYRIZA's MEP Stelios Kouloglou co-ordinated the debate and stressed the need to isolate Golden Dawn from any attempt to present itself as an equal parliamentary party, as they are opponents of democracy. "It is necessary to isolate Golden Dawn from every parliamentary representation. The political world must make it clear that it is something that has to stay on the sidelines", he said.

During her speech, SYRIZA's MEP Kostadinka Kuneva noted that "the rise of the far right in Europe proves that the emergence of Golden Dawn's real face concerns the whole world, not just Greece", asking "all MEPs, all Democrats and anti-fascists to contribute to the special bank account opened to support the political action of the anti-fascist movement, ie the lawyers who contribute to this case".

Journalist D. Psarras stressed that "the core of the Nazi partners during Nazi Occupation was also the core of 1967's Junta". Also he explained how the collapse of the political system and the multi-faceted crisis helped strengthen Golden Dawn and elect MPs to the parliament, while underlining that the element that finally mobilized justice was that Golden Dawn was openly attacking the entire political spectrum, using blind violence.

Professor N. Alivizatos said that "violence is a Golden Dawn’s constituent element", adding that the best way to deal with it is to recognize it as a criminal organization. He also called for its political and social isolation.

Th. Kampgiannis recalled the three mischevious acts for which the members of the Golden Dawn brought to justice. "Golden Dawn has hit immigrants in the face of Egyptian fishermen, ideological opponents in the face of Communist Party’s trade unionists and antifascists in the face of Pavlos Fyssas", he said and continued: "Golden Dawn is an organization whose political offices are a base of assassination attacks’’. And noted: ‘This affair is not only about the family of victims, but society on the whole".

Preaching her documentary, A. Kourounis pointed out that when the filming began, there was no far-right or Nazi party in the parliaments of Europe. "There are now such parties in many European countries. What was at first an exception, now it has become a daily routine", she noted, explaining her motivation to film: "I wanted to understand how Golden Dawn which used rough violence is the 3rd political party for 5 years in Greece".

See here all the photos from the event

Here you can find a short video of speakers’ commentary

And here you can watch the whole event:

Dear colleagues and staff Members, It is a pleasure for me as Vice-President in charge of Gender Equality and Diversity to address this message to you on the occasion on the International Day against Homophobia, Transphobia and Biphobia. This International Day it is an important as never before. And why is that? Because we have at least 81 countries that criminalise same-sex relationship meaning that 40% of the world population are not free to choose who they love. Even worse in 10 countries the death-penalty can be applied for same-sex acts. The EP has been always committed to promote Human Rights and Diversity and combat any kind of discrimination. Towards strengthening these core-values a High-Level Group on Gender Equality and Diversity was set up in 2004 closely cooperating with other Parliament Bodies. Since I took office almost 2 years ago the High-Level Group successfully submitted to the Bureau an action plan on Gender Equality and Diversity for the Secretariat. This key document highlights the vitally importance of combatting homophobia and transphobia in order to achieve an open and inclusive working environment. I am confident that with your active support, commitment and cooperation the High-Level Group will be successful in its difficult and challenging work. Thank you very much for your kind attention.

SYRIZA MEPs meeting the member of the political secretariat of SYRIZA, Yiannis Bournous

Greek Bondholders at the EU Parliament

15,000 individual Greek bondholders were forced to accept a 75 per cent “haircut” on the value of their investments in last year’s partial default agreed with the EU and International Monetary Fund, despite the fact that they had received official statements from the Greek government that they would be excluded.

The so-called “private sector initiative” (PSI) – the largest sovereign debt restructuring ever carried out – was imposed as part of a €170bn second international bailout, allegedly intended to prevent Greece from crashing out of the eurozone in 2012. Unfortunately these actions have led many of the bondholders to poverty and some of them even to suicide. 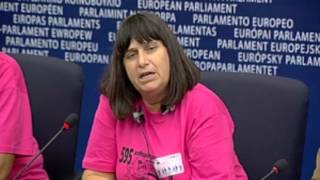 Solidarity with the Greek cleaning ladies! No to deregulation of workers' rights in Greece 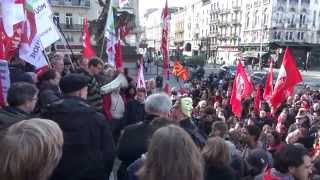 Hundreds of protesters gathered on Sunday (15 February - not Fenruary as the video says - 2015) in Brussels in order to show their solidarity to the Greek people and to support the Greek government against austerity ahead of negotiations with the IMf, the ECB and the European Commission, in order to end the bailout program. In this video there are interviews of SYRIZA MEP Manolis Glezos, Secretaire General CNE Union Felipe Van Keirsbilck and Secretaire General FGTB Nico Cue Union.